Get to know us. At the moment we have two glassblowers working at the studio. One permanent and one part-time employee. Both have a long and valued career behind and still going strong with glass. Occasionally we get help from a brilliant glass blowing student.

Take a look for an overview of glassblowers mind and thoughts: https://youtu.be/sWhYl-AKnJY

Special thanks to Christian! (czambetakis@yahoo.com)

I was born in 1963 in the Nuutajärvi glass village, thus it is no surprise that I ended up in the glass trade. The glow of glass ovens attracted - and somewhat frightened - the schoolboy that passed through the factory yard every day on his way to school. When my brother Reima started to work at the factory and began to bring his "lunch hour creations" home, I became even more interested in glass-blowing. In the age of 16, in 1979, I was employed as a delivery boy by the pressed glass shop. Luckily, I managed to become a "courier" at the Unto Suominen glass art workshop a few weeks later. Since the glass seemed to obey my commands better and better every day, I became convinced that it is the job I am best at.

In the age of 18 I was already the senior blower - while the "junior" blower was only…44.Co-operation with professional glass-blowers and top-class artists (incl. Kaj Franck, Oiva Toikka, and Heikki Orvola) provided me with a good overview of the trade in Finland.

My own ideas, however, kept circling in my head and lunch hours were no longer sufficient for their realisation. It was time for me to make the difficult decision - to leave behind the familiar and safe glass factory and to try something else.

I worked at small Finnish studios for 5 years, and this gave me experience necessary for establishment of my own studio.

In 1995, I was employed by the IVV factory near Florence, Italy, as an instructor and production designer. The Italians sought for a teacher from the Nordic countries - a person sufficiently qualified and experienced in Scandinavian glass-working techniques. In the truly Italian style, the person was expected to be "communicable".

I worked for the Italian company for a couple of years and acquired many Italian friends. I somehow felt "like an Italian" myself, even though I looked different. Our co-operation went well - I sometimes still visit the place in order to work there for a while.

In co-operation with painter Mauro Capitani from Toscana, I created the glass items for his exhibition.
Acquaintance with Maestro Italo Ballarini opened the doors to Murano as well. We became good friends and still meet once in every two years. Maestro and his wife visited the Bianco Blu Studio in summer 2000; they have a genuine Fiskars glass bottle at home as a memory of this visit.
In August 1997, I established the Bianco Blu Glass Studio; from that time on, I have worked at Fiskars. Fiskars is a perfect place for me. Artists involved in various forms of art reside there; because of that, the co-operation possibilities are limitless.

As a glass blower, I participated in the projects of following artists:

Reima Maaronen was born in Nuutajärvi in 1957 and has worked with glass since 1972. Over the years, he has developed his skills and evolved into a masterful glass blower, whose hands have created the Birds by Toikka, as well as the works of numerous other artists. He has also honed his skills at summer workshops that have been organised at Nuutajärvi and led by Venetian masters. This is also reflected in Maaronen´s own work, in which his imagination, blowing skills and management of versatile foundry techniques have been combined with Italian influences. 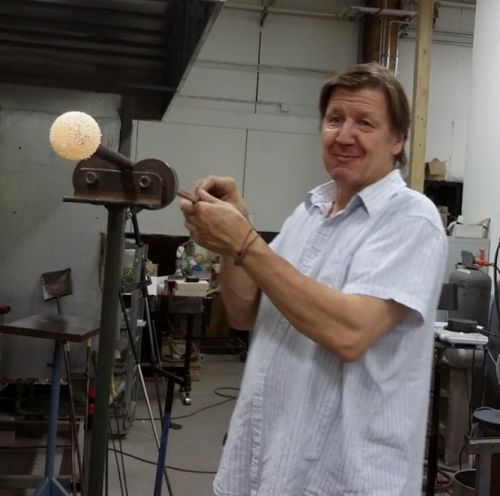